FC Barcelona went to Sevilla to play against la Liga’s fifth ranked side a few days after meeting Lyon in the Champions League. Barça have been in a February lull (four draws and a 1-0 win against humble Valladolid throughout the month), and it seemed that the doldrums were continuing through the first half of Saturday’s game at the Sanchez Pizjúan. Sevilla scored twice, with Messi getting a goal himself before the half.

Valverde switched up his team and took off Semedo and Arturo Vidal. The concerns about Semedo’s defensive frailty on the right side have reared up again after months that the Portuguese seemed to earn back a large measure of trust. Semedo has been a challenging figure to depend on–he promises some of the attacking energy that Dani Alves used to provide, but he does get beaten by opposition on counter attacks. The lights are bright at Barcelona, and if a player hasn’t defined himself as titular quickly (as Umtiti and Arthur did) then they are questioned harshly.

Coutinho also got the start, surviving on the pitch into the second half. This provided an unusual line-up for the second half of Messi, Suarez, Dembélé (on for Vidal), Busquets, Rakitic, Roberto (on for Semedo), Alba, Pique and Umtiti, plus Ter Stegen in goal. This was a gala eleven that Valverde seemed to treat as a hail Mary instead of a presumed inevitability.

Umtiti hadn’t played a game in months. His phantom knee problems have kept him out of the side and instead in the company of physiotherapists in Dubai, or Barcelona, or Munich, or who knows where since last year. Though they shipped two goals by the half, his confidence on the ball in challenges and distribution did return to reassure the Blaugrana hopeful. My own invented Umtiti chant returns to my mind…”Um-TI! Um-TI-TI!”

So then how did the team play in the second half with their club record signings all in the side? Coutinho was active, if not clinical in his passing and disruption of the Sevilla midfield. Dembélé continued to show his gifts in one-on-ones and faking out defenders to break lines. Suarez dropped firecrackers at the front, and Messi was imperious.

Messi showed again why he is the world’s greatest player against Sevilla; His second goal to equalize was a canon shot with the right foot from near the edge of the box. The third was a subtle scoop over the keeper he picked from a deflected blast from the ever-sparky Carles Aleña–who’d come on to replace Coutinho. Like that, with eighty minutes played, Barça had staged another remontada at Sevilla.

My favorite come from behind win in Seville was during Tito Vilanova’s sole year as manager at the club. At the time, it was a disgruntled Villa who came on as a late sub to score in extra time and send Jordi Alba and Tito into each others arms with ecstatic triumph.

In fact, Barça saves some of its most satisfying victories for the fixture, and this one couldn’t have come at a better time in the season. It may be the kind of performance that signals a return to explosive form for the yawning giants. Messi seemed hell bent on taking the game by the scruff, as they say, and grabbing the victory single-handedly. He scored his 50th career hat trick. I also must feel some sympathy for Gerard Deulofeu, playing for Watford now. He left to the Premier league, in part to get out of Messi’s shadow along with so many other Barça attackers. Though he scored a hat trick the night before against Cardiff City and secured his adopted club the win, Deulofeu’s accomplishment would once again be overshadowed by Lionel. As if to show some willingness to pull his weight and snap out of a sloppy patch of form himself, Suarez scored a fourth at the end of regulation time–naturally, assisted by Messi. 2-4 final. Barcelona win in their most thrilling performance in nearly two months.

And now, Barça will play two away Clasicos against Madrid. The first is midweek for the second leg of the Copa del Rey Semi finals, and the second to be played on the weekend in la Liga. Then another league game, followed by the return of the Champions league with the second game against Lyon and all to play for in Europe. No need to grab their nuts in Simeone-like displays of defiance. All that’s needed is to win. 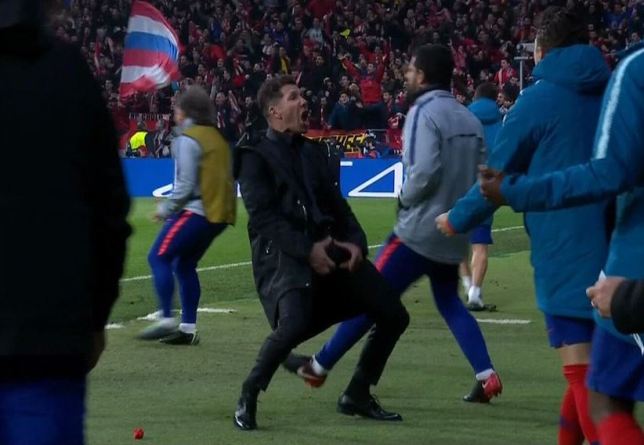 One thought on “Messi’s Garden of Revenge”